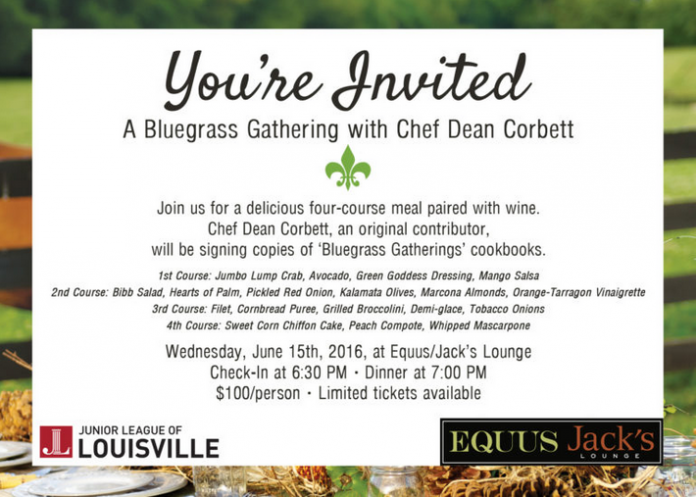 Just 100 tickets are being sold to an exclusive treat — a four-course dinner with chef Dean Corbett at Equus/Jack’s in St. Matthews on Wednesday, June 15. The event benefits the Junior League of Louisville.

The Bluegrass Gathering features a menu created by Corbett, who is a major contributor to the current Junior League cookbook, Bluegrass Gatherings: Entertaining Through Kentucky’s Season. Corbett will be on had to sign copies of the book at the dinner.

The four-course feast includes wine pairings to go with such delectable items as Jumbo Lump Crab, Bibb Salad and a Filet.

The book is a seasonal, menu-based cookbook that features recipes from celebrated local chefs and restaurants. Junior League members contributed recipes and spent many hours testing.

The Junior League is an organization of women committed to promoting volunteerism, to developing the potential of women, and to improving the community through the effective action and leadership of trained volunteers.

The dinner starts at 7. Tickets are available through the Junior League.