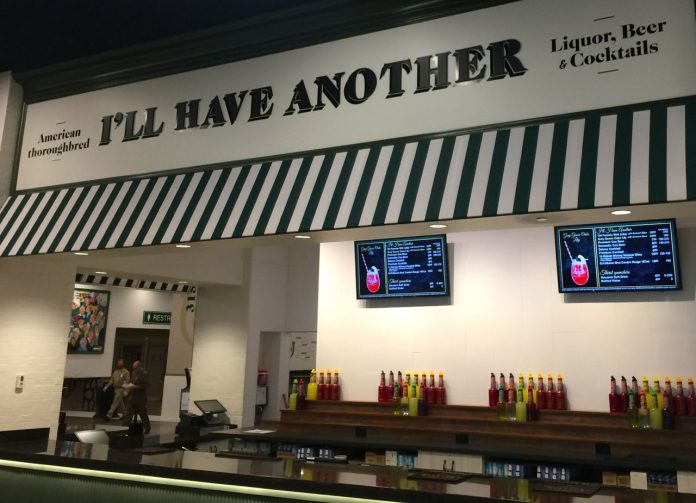 When you go to the track this week, you may be tempted to bring a box lunch, which many local restaurants are marketing to track-goers. But the advice here is that you shouldn’t do it out of fear that the grub at the track won’t satisfy you.

Executive Chef David Danielson is focused on the quality of cuisine at Churchill Downs, from the buffets on the expensive upper floors to the hot dogs you can buy in the paddock. Last week, he unveiled the newly remodeled 2nd Floor Clubhouse, which requires a relatively inexpensive ticket to enter, and where you can now choose from barbecue, pizza, Mexican, chicken and burgers, plus dessert.

Danielson, who appeared on the EatDrinkTalk podcast last fall, said that he’s been building relationships with local farmers to provide fresh produce. For instance, he showed me photos from a Mt. Washington farm producing lettuce and strawberries shipped directly to the track the day before they’re served.

Churchill Downs invited media to sample some of the new staples last Friday. I tried the Hot Brown Pizza, which did have the distinct flavor of the famed dish’s Mornay sauce, along with bacon and turkey. I also tried a chicken burrito at the Central Avenue Cantina. I could easily imagine ordering both for a treat while focusing on the horses.

In previous years, this second floor area was a self-serve circle where you picked up your own food and paid on the way out. Ready-to-please servers at the seven storefronts in the new configuration seem ready to go, though I’m sure they will be challenged to keep the lines short during Derby Week.

There is limited seating, so the idea here is to grab something and head back to your seat or out to the paddock.

I did appreciate the smart marketing folks who named the bars at two corners of the space, using aptly named past Derby winners — Spend a Buck and I’ll Have Another.