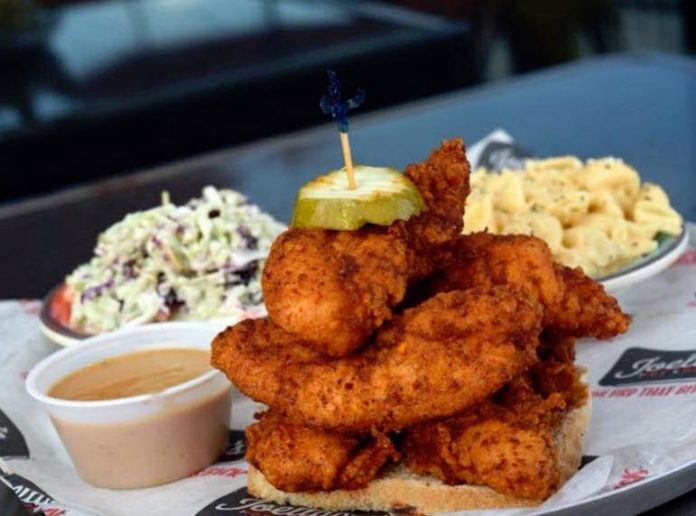 Nineteen days have passed since unknown restaurant critic Marcus Weston wrote a scathing review about a single visit to Joella’s Hot Chicken, and yet his story still sticks in my craw.

Writing for KitchenBanter.com, a blog created by local chef Griffin Paulin, Weston disparaged every aspect of the food he ate and the surroundings in which he consumed it.

Worse, he also made what Joella’s founder Tony Palombino called defamatory statements that could lead to a court room confrontation.

If you haven’t read it, I don’t recommend it since it was an unprofessional slash job by a writer with no record of published work or even restaurant work history. In fact, if you search for Marcus Weston on the web, you’ll find no person by that name who is remotely connected to the character who deemed himself judge of Joella’s. (We’ll get back to that issue shortly.)

But what’s particularly troubling to me about this review is Weston would become so upset, enraged and critical of a single restaurant meal. Some examples:

On the restaurant’s décor: “Joella’s looks like a 19 year old girl blew her textbook money at Bed Bath and Beyond on Black Friday. I mean, it was SO kitschy and off base, it was almost offensive.”

Anyone other than me find that childish? It was tedious enough to read former Courier-Journal restaurant critic Nancy Miller bemoan the dated drapes at J. Harrod’s two years ago, but this topped even that.

On the food: “Did Chef Palombino jump on AllRecipes.com and cherry pick the ingredients they carried at Speedway?”

So Weston doesn’t like the taste of a restaurant’s food? Fine. Yet unable to leave it at that, he then accuses a well-known chef with 25 years in the trade of shopping for ingredients at a convenience store.

Another: “The green beans, however, will remind you of Granny’s. Provided, of course, your Granny smokes over the stove as she opens a can of Del Monte goodness, throws in some raw bacon, and lets that combination simmer for three minutes before slopping it on your plate, for better or worse.”

Reading that leaves me tempted to dip to Weston’s level and write, “Dude, your granny’s gross because mine never did that,” but that would likely offend his granny. Weston may think he’s being cheeky, but he’s only showing a lack of professionalism and restraint.

What would motivate someone to be so spiteful over a plate of chicken and vegetables? Bad meals are a First World problem, dude, they’re not life and death stuff.

But to an operator like Palombino, one who could lose customers from a bad review, this is deadly serious business. So in the wake of the review, Palombino is moving to sue Paulin for defamation.

Why Paulin and not Weston? Because Palombino, like many, believes Weston doesn’t even exist—despite Paulin insisting he does—because there’s no trace of this particular Marcus Weston on the web. His Facebook profile shows two friends, one of whom is Paulin, yet virtually no other information.

In multiple private messages Paulin has said to me that Weston not only “exists,” but that he’s going to stand behind the reviewer and not remove the review from KitchenBanter despite Palombino’s request.

Regarding the threat of a lawsuit, Paulin’s stance is Palombino’s got no leverage against him since 1. Weston’s opinion is Weston’s and thus an exercise of free speech; that 2. he’s merely given Weston a place to air his opinion; and 3. that all opinions aired on the site are exclusively those of the writer. He’s also said that since KitchenBanter generates no revenue, there’s nothing to sue.

I’m no lawyer, so I don’t know whether a lawsuit would stand up in court, but at the very least I see Paulin’s stance as feckless and potentially reckless for a guy who’s weeks away from opening his own restaurant, Mirin. Despite those who’ve congratulated him on publishing Weston’s controversial review, there appears to be an equal number of readers and restaurant fans who are put off by it. Risking offending that group to the point that its members would sidestep Mirin seems like an unwise risk to take—especially if there’s no reward of revenue from the web product.

Yet while the simplest thing to do would be to remove the review and avoid any further controversy, Paulin’s not doing it.

When Palombino was a guest recently on the EatDrinkTalk podcast, he made a good point about it being odd that a blog run by a restaurant chef-owner would become a megaphone for criticizing other restaurant chef-owners. He said he knew of no line of business in which owners created blogs through which they trashed other owners’ and their businesses. (I certainly know of none off the top of my head.)

Off air we discussed Louisville being a small town with a closely knit restaurant community, and how publicly lambasting another within the same trade was chancy, “especially when you’re a guy getting ready to open your own place! Now’s the time to create goodwill, not make people angry,” Palombino said.

(Paulin was invited to speak on the podcast, but he declined due to the pending lawsuit. But through a pair of Facebook videos [1 and 2], he’s shared his opinion.)

I agree with Palombino, but in a nuanced way: He’s right in that this is a tight restaurant community, but that’s changing with this youngest generation of owners and chefs. Using social media, many are becoming rudely outspoken about their dislike of competitors and their products. And when I talk to the old guard about it (chefs and owners between 40 and 65), they’re shocked at what’s being aired publicly—things they know such people would never say to the faces of those they’re criticizing. It’s becoming anti-social media in the worst way, and I sense we’re seeing just the beginning of the problem.

Weston’s mess of a review is an iconic example of that problem. His work is rife with the self-centeredness and cowardice so commonly attributed to Millennials who want everything their way and who take to social media to demand it. His opinion of Joella’s is simply bilious, and it in no way honors the difficult craft of restaurant reviewing. It’s my wish that this be his first and last effort.