Stick a Feather in His Hat: Yang Kee Noodle Highlands will open any day now. An invitation received last week to a Saturday soft opening at the Highlands Yang Kee Noodle meant that the woks will be screaming hot this week as the doors open to paying customers. What day, exactly, we don’t know. When YKN opened its Middletown store last year, its owners stayed quiet in the early going while the staff gained some experience before the crunch. Always good food here. Excited about its Highlands location. 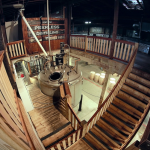 Free tours at Kentucky Peerless Distilling, June 3. Louisville’s newest distillery, which turned 1 in March, is celebrating with free tours on Friday from 10 a.m. to 9 p.m. If you’ve not been, but always wondered what a whiskey distillery looks like, there’s no better place locally to get an up-close look.

Peerless was designed with great whiskey and tourism in mind, and the facility was to facilitate both. Tastes of its Lucky Moonshine will be available, but, sadly, none of its rye or bourbon will be available until 2017 and 2019 respectively. Takes guts and a huge cache of cash to not source whiskey from other distillers and label it as your own. You have to admire owners Corky and Carson Taylor for going the hard way. In the upcoming EDT podcast, we’ll talk to Corky.

El Camino is moving, NOT CLOSING: Just wanted to reiterate that. Seems no matter the effort made by local media to communicate this message, some folks continue to hear “closing” rather than moving. Best way to learn the details on why is from Larry Rice himself, who spoke with us on our most recent podcast. Sometime this summer, El Camino will shut down the Highlands operation and move it to Germantown, where it will resume making tacos and serving fab cocktails and tequila. The Eagle, a Cincy-based fried chicken and craft beer stop, will replace it. Nuff said.

We’ve got Issues with this List: It may be fun to count up on the votes for Louisville Mag’s Best of Louisville Awards, but Rick and Steve have some issues with just the finalists, which were announced this week. Out-of-town spots topping the Special Occasion list? Bearno’s? El Nopal? And we didn’t even get to the Media awards. Hear us talk about it here:

Just Release(d)s: Dogwood Coffee Co. is a roaster based in Minneapolis. Its product are now available at Gralehaus on Baxter. . . Bourbon & Bowties, a fundraiser at Corbett’s June 9, is SOLD OUT. 26 local restaurants are participating. . . Get to know Todd Antz, organizer of the 11th annual Fest of Ale, in the latest EDT podcast. And plan to attend the big event in a new location (New Albany’s Riverfront) on Saturday. . .Will restaurants lead the way in Portland? A Louisville Public Media story looks at Over the 9 at the one-year mark and considers whether Portland’s renaissance has momentum. . . Bourbon Heroes – Evan Williams is honoring American military heroes by featuring them on the labels of bottles this summer. You can nominate your own hero, too.