“Well, shut the front door,” Guy Fieri’s Smokehouse is really going to open next week. After we media drones get a sneak peek on Thursday, Sept. 8—so we can write about it being “off the hook” and “out of bounds”—it opens to the public on Saturday, Sept. 10 at 9 p.m. (Yes, 9 p.m. Must be a new daypart called Latino Hours.) This restaurant, located on Fourth Street Live! (434 S. Fourth St.), will be the flagship for what appears to be a growth vehicle brand.

Fieri’s gob-stuffing visage has become virtually synonymous with The Food Network, the media juggernaut that’s been his “bus to Flavortown,” wealth and fame ever since. But unlike many of his camera-purty peers, he earned his chops as a restaurateur before becoming a “money” making slogan coiner.

As the name implies, the restaurant is a smoked meats concept, yet since there’s no menu online yet, we don’t know any details about the carbon-coated proteins. However, according to a news release, the restaurant space is as enormous as his personality, spreading over 6,700 square feet that, interestingly, includes only 117 interior seats. (Restaurants that size typically seat triple that number.) The outdoor patio, which at 2,200 square feet is larger than many quickservice restaurants, seats an equally head-scratching 79 diners.

According to the news release, “representatives from Guy Fieri’s Smokehouse are available to speak with media,” which likely means we’ll not get to see Fieri in all his bleach-tipped-ness. Given that he’s got six concepts and some three dozen restaurants under his belt, I’m thinking he’s done his fair share of grand openings.

Jack’s Lounge pivots, lowers happy hour prices: I generally don’t write about restaurant price changes or happy hour upgrades since everyone makes such tweaks on the run. But this one’s a bit different, and here’s why. 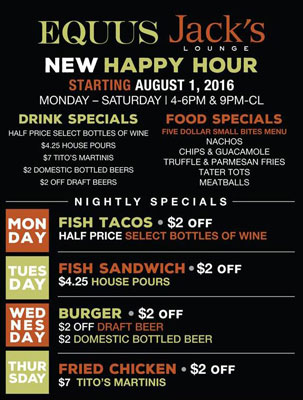 Jack’s Lounge, the classy-casual bar-centric spot conjoined to Equus is lowering prices on select appetizers from 4-6 p.m. and after 9 p.m. to, what else, bring in more customers. Dean Corbett, owner of both spots, describes the move as the latest in a series of course changes taken to stay relevant with diners’ changing tastes.

“It’s the same thing almost everybody’s going through,” he said Tuesday night to a handful of reporters. “It’s competitive as hell, and you just can’t stay still or you’re in trouble.”

He should know. Since acquiring Equus in 1985, he’s changed it from a gourmet white tablecloth spot serving headline grabbing food, to a far more casual operation. Some of that doubtless was the result of opening Jack’s Lounge 16 years ago. Customers liked Jack’s relaxed environment, yet wanted Equus food while reclining in their cushy leather loungers. Not long after, a door was opened between the two, and a few years later, even the tablecloths disappeared from Equus.

But as Corbett’s pointed out, many of his original customers have passed away, and that with all the new restaurants in town, it’s increasingly hard to get their descendants to patronize his businesses as did their forefathers. Many long-running restaurants here face the same struggle, equally noteworthy places like Vincenzo’s (30 years) and Lilly’s Bistro (29 years). Tables aren’t jammed nightly like they once were because dining options are so plentiful, yet they’re still in business.

Every economic indicator points to a restaurant industry recession already begun, yet it’s not even near its peak. The blame for the downturn? Overcapacity: not enough people to fill the available seats. Yet there are plenty of new openings still to come here and elsewhere before year’s end.

It’ll be interesting to watch how these veteran operators weather the oncoming storm. Until then, I’ll likely tie into some $5 truffle fries and a well-made Old Fashioned at Jack’s.

OAK Feast O.F.F. set for Saturday: If local meteorologists are to be believed, Saturday will be gorgeous, so get out and enjoy the Organic Association of Kentucky (OAK) Feast O.F.F. (Organic Food Festival) from noon to 4 p.m. at ReSurfaced in Phoenix Hill (at the intersection of Shelby and Liberty streets). 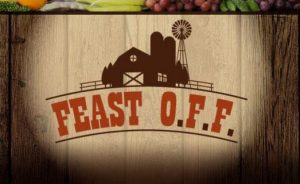 Though admission to the event is free, food tastes cost $3 each.

Held at the Clifton Center (2117 Payne Street), the event begins at 5:30 p.m. with cocktails, hors d’oeuvre and the auction, followed by a five-course dinner at 6:30. The menu that evening will be prepared by a list of culinary who’s who in Louisville: Matt Durham and Nick Sullivan (The Seelbach Hilton Oakroom), Jonathan Exum (Wiltshire Pantry), Jay Denham, Duncan Paynter and Bob Hancock (Red Hog Artisan Meat), Michael Hargrove (American Culinary Federation, Kentucky Chapter), Bobby Benjamin (Butchertown Grocery), Patrick Roney (Harvest) and Erica Parker (The Comfy Cow). Wine pairings are courtesy of Horseshoe Bend Vineyard and Winery, and beer is from Against the Grain.