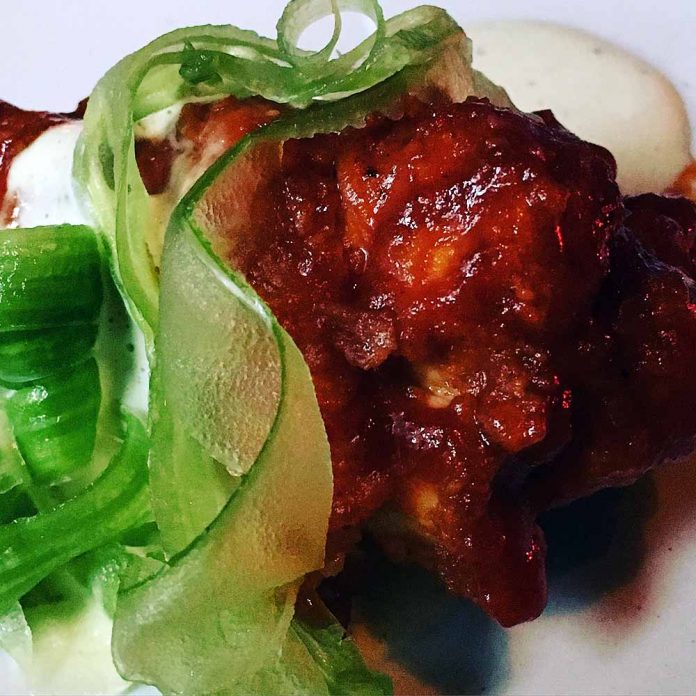 People say all the time, “If I were on death row, that would be my meal.” And that was the sole inspiration for Bistro 1860 executive chef Michael Crouch’s Death Row Dinner. The 11-course meal was served last night, May 25, and it was a fantastic feast for the senses; beautiful and flavorful food paired with multiple adult beverages. (Click here to read the menu.)

Some might cringe at the price tag—$99 for the food, $130 if you had it paired with beverages—but as a special occasion meal, it was well worth it to me, my wife and my son, who we brought with us to celebrate his high school graduation. Trust me, I can’t afford such indulgences often.

Crouch and his crew put on a great show, delivering close to 1,000 plates to waiting, salivating guests. (I have a feeling the dishwasher is still there this morning, and tonight the Death Row Dinner will be repeated!)

By the way, the sold out event saw some cancellations, so if you want to go, call the restaurant at 618-1745 to see if any seats are available.

Side note: I’ve seen a few negative posts in social media about Crouch’s choice to call the meal a death row dinner. Some said it was in poor taste, and an editor I wrote a piece about it for said she was strongly against such a meal.

Though I see these people’s point, I still view this as a case of placing personal beliefs well beyond the obvious context of a situation. The saying, “a death row meal” is just that, a saying with obvious meaning: one’s last meal on Earth. It’s colloquialism meaning, “If this is my final chow down, I want it to include my favorite foods.” No one who says this assumes their death will follow.

I even did a Twitter search to see how the phrase was handled, and I found hundreds of food photos paired with tweets about how “this would be my death row dinner.” Nothing dark or disrespectful.

Most people have strong feelings about the death penalty; me among them. But anyone who knows Crouch knows his sense of humor and his boundless creativity was behind this meal. This dinner was about an otherwise ordinary saying turned into a feast, not a mockery of anyone’s execution.

Below are some photos of what we enjoyed last night. Too bad I consumed the delicious cocktails before I got a change to photograph them. Kudos to Stephen Dennison’s bar team as well!