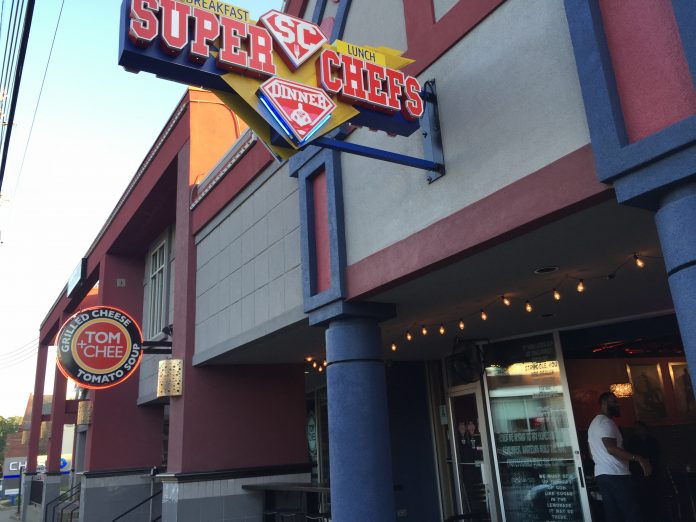 Fans of the SuperChefs in St. Matthews, which burned to the ground last year, were thrilled when Darnell Ferguson opened anew in the former Wild Strati location in the Highlands in July.

But for two months, the comic-book themed restaurant has served only breakfast and lunch, closing at 3 p.m.  According to Ferguson, the delay on dinner had to do with applying for a liquor license, which he had to re-do with the new location.

Tonight, Sept. 23, SuperChefs opens to the public for dinner. I stopped in at the soft opening Wednesday, took a seat at the bar and allowed Nan and Julie to suggest something light. I went with a delicious cocktail tabbed a “Bachelor(ette)” with Jack Daniels Honey-flavored whiskey and lemonade.

I went back and forth on what to order from the appetizer menu, leaning toward a fried oyster dish, but the bubbly Nan strongly suggested the Southern Egg Roll. It was stuffed with fried chicken, Mac-and-Cheese and greens, with a sweet potato sauce ($9.99).

But from my seat, I could see some elaborate creations coming from the kitchen, including one called the Suicide Squad ($48.99) — consisting of fried cornish hens, enough food for “two normal people or one Super Human.” Another ordered the visually-stunning Riddler ($18.99) consisting of four meatloaf cupcakes with mashed potato icing.

I even spied a selection of ice cream cones someone had for dessert.

All the dinner menu items are named for villains, including the Green Goblin, Bane and Dr. Doom.  I also spied a Harley Quinn ($18.99) that someone ordered — a stack of sticky ribs with fried corn. It sure looked tasty.

Dinner hours at SuperChefs are Wednesday through Saturday from 5-11 p.m.