It’s amazing how many talented chefs find their way to Louisville. Or in Bill Jennings’ case, find their way home to Louisville. We talk with the executive chef at LouVino about the restaurant’s growth, his upbringing in the ‘Ville, and going off to culinary school in New York straight out of St. X.

Of course, the story dominating local news is the collapse of John Schnatter’s reputation. Even though the story was just breaking when the podcast was recorded, Carolyn brings her take as 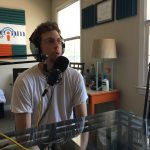 a crisis public relations expert, and has some advice that we’re sure Schnatter will ignore.

Our Eats of the Week segment includes Carolyn’s trip to Germantown’s newest dining hotspot – Couvillion, where she sampled some southern-style Brisket and sides. Rick tried a slice from the new Pizza Bar at Fourth Street Live.

Speaking of the downtown entertainment venue, the show’s sponsor holds its Farmers Market every Wednesday, and the big show coming up on the Street is Nelly on August 3.