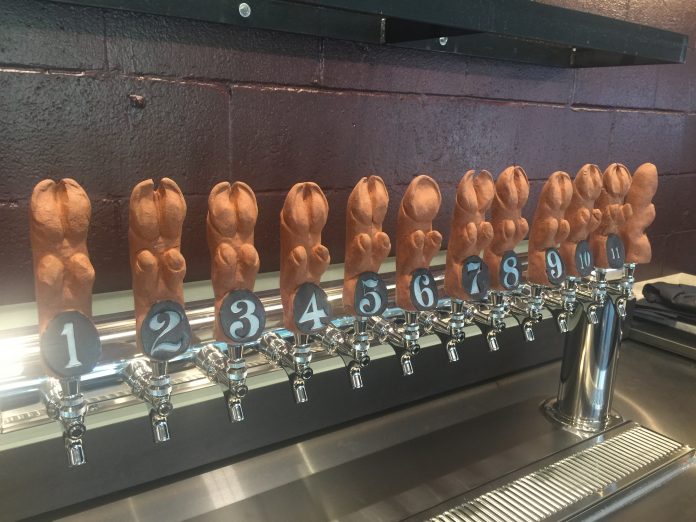 All it took was a homemade sign printed on brown wrapping paper taped to the window, and on Sept. 22 a steady stream of customers started showing up at the Red Hog Butcher Shop. Neighbors have been watching the progress on the former gas station for 18 months, so when the doors opened, with no fanfare, customers were ready. 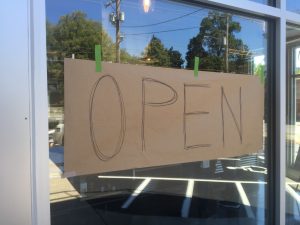 One of the first placed an order for four lamb’s heads, an item partner Jay Denham said you won’t find anywhere else in town.

“This is the first day, with no publicity, we’re trying to get the kinks worked out,” said Bob Hancock, who owns the Blue Dog Bakery a few doors down with his wife Kit Garrett (also a Red Hog partner, with Denham and Duncan Painter). “We didn’t want to be inundated with too many people the first day. But I can already hear the buzz out there in social media.”

Hancock and Denham know the business, and have been talking about creating Red Hog for more than eight years. Denham has been abroad, studying the way meat is cured first in Italy, and then on a trip with Hancock to Spain.

“It’s been an eight-year dream of both of ours,” Hancock said. “We were both tinkering around with pigs and pork. What I want to accomplish at this place is to be in control of the animal from the time it’s born until it’s finished and put in the customer’s hand.”

Denham took me on a tour of the back of the shop, where animals are brought in and the process of fabricating the meat begins. Deliveries of animals started a few weeks ago.

“If anyone comes in here to shop, we can tell them what farm that animal came from, everything they want to know,” Hancock said. “We’re taking a big risk here, actually. We’re going to have to change people’s shopping habits. They’re going to have to want to support local in a big way.”

He explained that the meat will be offered for sale in the butcher shop first. 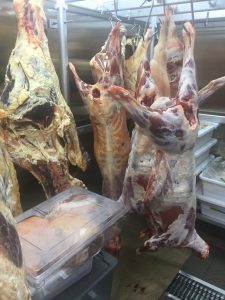 “When they come through the back door it’s the whole animal. We break the animals down in the book and start the process of fabricating whatever products that we’re going to do. It’s a whole animal operation.”

Products that don’t immediately sell in the butcher shop will be sent over to the adjacent cafe, where a chalkboard menu will tout the day’s specials. That part of the business opens in a few weeks, Denham said, and will feature a wood-fired oven and grill, a small seating area, and a full bar featuring beer taps topped with artistic pig’s feet. Small plates will be offered, plus pizzas and sandwiches.

The project of turning the former mechanic’s shop into a butcher shop began about 18 months ago, Hancock said. Delays involving EPA cleanup caused delays, but the partners persisted in getting Red Hog opened. Denham believes it will become a destination for customers with unusual requests.

“We can get pig head, beef heart, tongue. You can get anything here,” he said.

The owners haven’t yet settled on hours of operation, but said that they’ll be open at 10 a.m. Tuesday through Saturday.

Hear from Bob Hancock in an interview with Steve Coomes on this week’s episode of EatDrinkTalk, the podcast, later this week.