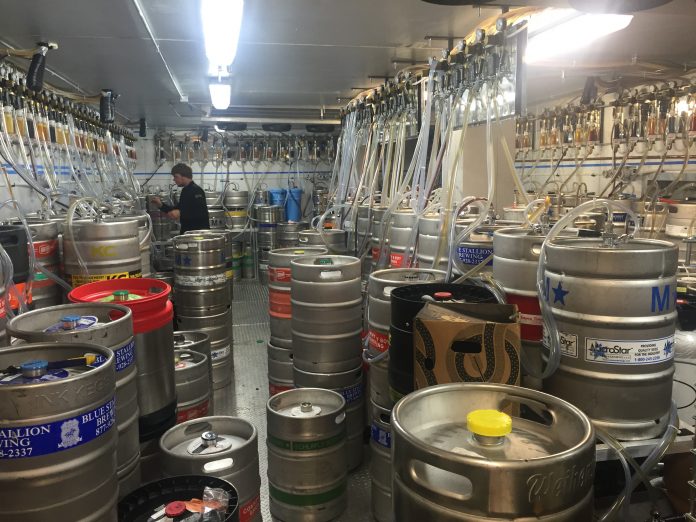 If you’re going to open a restaurant with the intention of keeping 132 beers on tap, this is the kind of room you’ve got to have. Steve and I got a sneak peak at the new Hopcat, a HUGE new bar and restaurant opening Saturday on Bardstown Road at Grinstead.

Hopcat’s founder, Mark Sellers, is a big music fan, so you see specially commissioned art featuring rock and roll icons, art made of vinyl records and even a wall of album covers. But the best decor may be the hallway of photos of Muhammad Ali posing with music legends.

Keep an eye out here at EatDrinkTalk for Steve’s take on the place.

Too Much is Not Enough: Yes, we’ve been to a lot of soft openings lately, and we are hearing and talking about more new independent restaurants coming to the ‘Ville. But a new Nation’s Restaurant News article warns that a tipping point may have arrived and next year may see a recession for restaurateurs. The story speculates that the industry may have overbuilt in recent years.

Worth Walking For: Mark your calendars for Sept. 3, the date for the 3rd annual benefit for Alzheimer’s hosted by DiFabio’s Casapella. Proceeds from that night’s dinners in both Louisville and the family’s Madisonville restaurant will go toward supporting the Alzheimer’s event at Waterfront Park Sept. 10. And listen to Jon Riley and Caity DiFabio on this week’s EDT podcast.

Rooms with a View: Open Table analyzed surveys from diners who left five million reviews of 20,000 restaurants and came up with a list of the 100 most scenic spots in the U.S. — It includes one in Kentucky — the Rivue atop the Galt House. It does have great sight lines of the city and the Ohio River, but we could certainly add to that list.

Subscribe for Good Coffee: As a proud member of the Dollar Shave Club, I’m surprised more subscription services for quality products haven’t caught on. I hope this one does — Good Folks Coffee Co. now offers its “expertly sourced coffee beans” by subscription. You can have it delivered to your home, starting at $14 per 12-oz. bag.

Quickies From The Internets: A C-J review of a Norton Commons’ lone Mexican spot, Citizen 7, credits chef Allan Rosenberg (of Fontleroy’s fame) with creating food that’s “assertive and fun.”. . . Not sure why you’d spend a day in New Albany, but if you did, here’s how to do it. (Louisville Distilled). . . Three years ago, Laurent Geroli left as executive chef of the Brown Hotel, creating an opening for chef Josh Bettis there (you heard from him on last week’s EDT podcast.) Now, Geroli is back in town as executive chef at the Marriott East (Biz First). . . 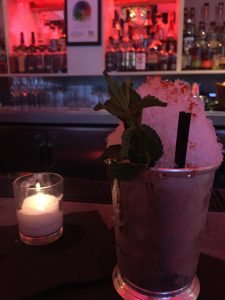 And a Drink To Try: I was fortunate to attend the Flyover Film Festival’s opening Sunday, featuring a beautiful documentary on Wendell Berry. The after-party was held at 21C, and that was all great too. But the best part was this drink called a Hot to Trot, which was served in a julep cup with Four Roses, Dry Curaçao, Fernet-Branca, cayenne, Demerara sugar, mint, Aztec chocolate bitters. I don’t know what some of those ingredients are, but I highly recommend the drink.