It’s Friday, so let’s get in weekend mode and plan some nights out on the town. Make the right call and choose from the ‘Ville’s burgeoning supply of brand new restaurants, including the new Louvino in Middletown (discussed here) and the 502 Bar & Bistro in Norton Commons (see our write-up here). We also dig the new meat pies at Cooper & Kings (hear our podcast with founder Joe Heron here).

The Blues are back, too, and we hear the barbecue available at the Water Tower for the Blues, Brews and BBQ party is first-rate.

With some 60,000 people expected to tour Homearama at Norton Commons in the next week or so, expect big crowds at the 502 Bar. And if you want to see some million-dollar homes, complete with off-the-charts design, plan to take in some of the 24 new homes on display there. One includes barn wood reclaimed from Lexington’s Claiborne Farm. You can hear from the Building Industry Association’s new chief executive, Pat Durham, on this week’s Rusty Satellite Show.

Now, some other news: 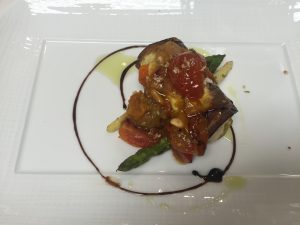 Not Just the Hot Brown: Every tradition needs an update now and then, but what they’re doing with food service at the Brown Hotel is truly amazing. Rick enjoyed his first experience at a Chef’s Table Thursday, and recommends the Eggplant Canelloni (pictured) and the Roasted Sea Bass (above) from the new menu. Adding Troy Ritchie (Corbett’s) and Andrew Welenken (Buck’s, the Goat) to the home team is a real plus for Chef Josh Bellis’ staff.

And what you don’t know is that the Brown is developing the space on its roof for private parties and events. From what I was told, the view is spectacular from 15 stories high, including a sight line extending up Fourth Street to the Ohio River.

FOR SALE: HISTORIC DOWNTOWN HOTEL: When we told you about the Oakroom’s temporary shutdown a few weeks back, we heard rumors that the historic Seelbach was for sale, but couldn’t confirm the rumor.  Now Insider Louisville reports that the only AAA Five Diamond (not four, like the IL story says) luxury hotel in Kentucky is indeed on the market.

Oy, Oysters!  We love oysters at EDT. Raw, fried, grilled, stewed, you name it, we can put a beat-down on some bivalves. Our own Steve Coomes claims that to have “stopped myself” at 20 Gulf oysters on a visit to New Orleans in 2009. And that was after his press tour group had already been to three restaurants.

Now if that isn’t oyster love, what is?

So we’re excited that John Varanese’s two riverside restaurants are celebrating National Oyster Day on Aug. 5. Yes, what is arguably the ugliest shellfish ever scraped from the muck of a marsh bed will be the featured and gorged-upon star of the evening at Levee at the River House and River House Restaurant and Raw Bar.

According to a release, River House will serve $1 Chesapeake oysters from 11 a.m. to 4 p.m., and Chef John Varanese will conduct an educational demo about oysters at the Raw Bar at 11 a.m., 12 p.m. and 1 p.m. Both River House and Levee will offer a special on New Zealand Oyster Bay Sauvignon Blanc for $7 a glass.

What’s more, guests who visit before Aug. 5 can sample three oyster recipes at the Levee, and vote on their favorite. The one receiving the most votes gets a spot on the menu in August.

How About Sunday Supper?: We love a good meal on Sunday, and if it benefits a great cause and features locally famous guest chefs? We’re in.

Fond of Louisville chef/writer/photographer Madeleine Dee is organizing the seven-event series to benefit Dare to Care. From Dee: “Each local guest chef will prepare a six-course meal for 12 diners based upon whatever inspired him to become a chef. These dinners will be artistic, carefully-prepared, and very special because they will only happen once. The chefs will personally describe each dish to the diners.”