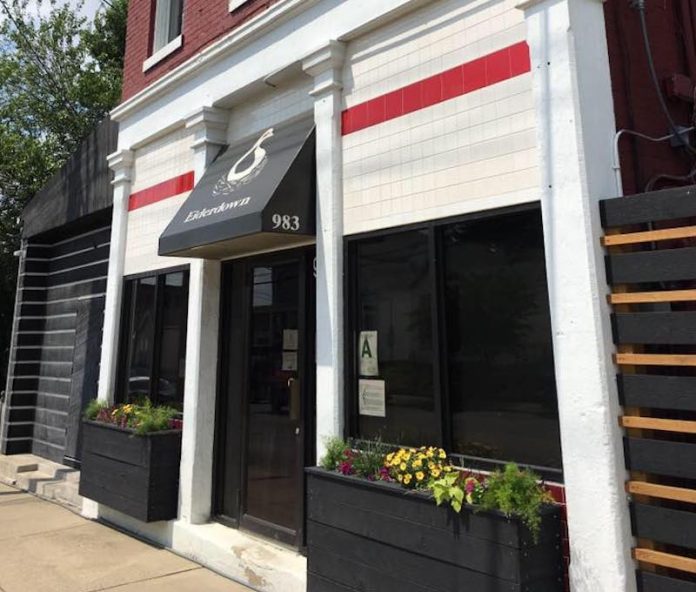 Eiderdown, the Euro-Southern-influenced restaurant at 983 Goss Ave. will be closed for the next two weeks while undergoing a transformation to a more casual restaurant befitting the evolving Germantown-Schnitzelburg scene. When it reopens on Feb. 7, it will be an affordable, German-food and German beer-centric restaurant geared toward attracting more customers from the neighborhood.

In an open letter to that demographic posted on Facebook Saturday, owners Heather Burks and James Gunnoe apologized for “prices and approachability (that) drifted outside the realm of what is comfortable for the typical Germantown-Schnitzelburger. … (W)e feel as if we have forsaken many of you, our closest friends and neighbors.”

If you ever needed a look into how hard it can be for restaurant operators to pivot and move to meet guests’ needs, here’s a good glimpse of that. Below is the full post from Gunnoe and Burks, with whom I hope to speak later this week.

Saw you at Kroger the other day; that new jacket looks nice on you. Real nice. Hey, you got a minute?

When we opened Eiderdown in October 2010, we had a vision: to offer European-inspired Southern comfort food, a bunch of beers and a good selection of wines all at reasonable prices in a comfortable, rustic setting. Our hours included lunch back then and we stayed open until 1am on the weekends, with the expectation that we would be an outlet for hungry folks who had been hanging out at the Nachbar (or wherever else). It didn’t take long to realize that — for the food we were making — 1 am was too late, then a few month later, we realized 11 am was too early. We got rid of late night and lunchtime hours that didn’t make sense and pressed on.

As the years and menus passed, we kinda strayed from our original objective. In 2014 and ‘15, we got busy with a zoning change that allowed us to tear down a warehouse and build a parking lot, as well as offer outdoor seating and liquor drinks. While the food remained delicious, our prices and approachability drifted outside the realm of what is comfortable for the typical Germantown-Schnitzelburger. While we have welcomed (and hope to continue to welcome) people from all over the city, region and beyond, we feel as if we have forsaken many of you, our closest friends and neighbors.

For this, we apologize.

Walking along Texas, Mulberry and Hoertz last Saturday, I realized how crazy it is, in such a densely populated section of Louisville, how few neighborhood folks Eiderdown regularly connects with because we have priced ourselves right off their radars. Right off YOUR radars. So like with the hours that didn’t make sense when we first opened, we feel it’s time to do some more adjusting. Here’s what we have in mind:

1) We will embrace German food. We don’t want to narrow it down so much that we call Eiderdown a German Restaurant, but we will have schnitzel, house sausages, house sauerkraut, potato soup, actual pretzels, spätzle as a side, etc.

2) Prices will drop, yet quality will remain high. As a result, we will be forgoing some local meats (the Nachburger and Sunday Sitdown will remain locally gotten). More sandwiches, fewer entrees, no $32 anything.

3) We will offer more vegetarian options.

4) Beer. We plan to eventually have the most comprehensive selection of German taps in Kentucky. We’ll offer liters, half liters and half pints of many familiar German beers and offer several out-of-the-way styles from smaller German breweries. We’ll round it out with locals, an IPA or two, a couple Belgian beers and Miller Lite.

We are really excited about these changes and feel like they will help Eiderdown nestle back into what we’d always intended it to be. It will take some time for the cabbage to ferment into kraut, so after dinner tonight, we will close for two weeks. We will open back up on Tuesday February 7 as a more embraceable restaurant that we hope you will be proud to have as part of the neighborhood. Either way though, we’ll still say Hey when we see you at the grocery store.

Thanks for your time, G-Town!