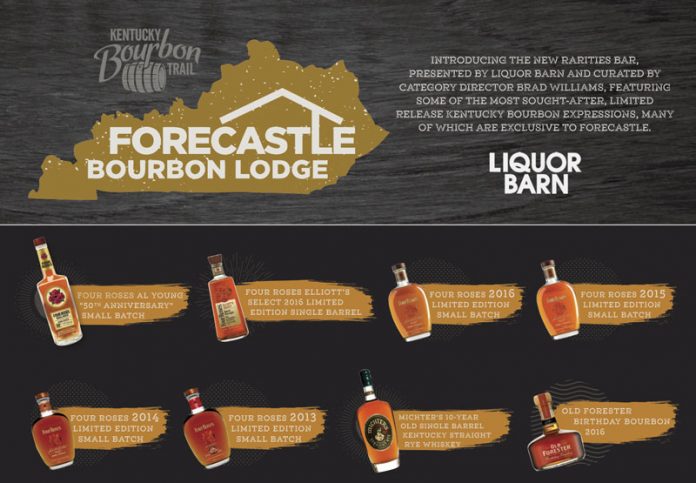 According to a news release, Forecastle’s new Rarities Bar, presented by Liquor Barn and curated by category director Brad Williams, will feature some of the most sought-after, limited release Kentucky Bourbon expressions, many of which are exclusive to Forecastle.

In addition, the Rarities Bar will debut unique, one-of-a-kind blends, crafted by Williams and Forecastle Founder JK McKnight, available for sample only at Forecastle and purchase at select Liquor Barn locations.

All Rarities Bar offerings will be released at specific times throughout the festival, and will be available until limited quantities are depleted. A full schedule of releases will be shared prior to the festival and those with Bourbon Lodge memberships, currently available at ForecastleFest.com, will have exclusive early access to the release schedule.

The Bourbon Cares program returns in 2017 to further its aim of matching distillers with Kentucky conservation partners. This year’s program will pair Forecastle Bourbon brands with Forecastle Foundation conservation partners to support numerous Kentucky-based projects, including the Green River and Pine Mountain Wildlife Corridor initiatives. Forecastle attendees can purchase the single-barrel private selections by the drink in the Forecastle Bourbon Lodge or by the bottle at select Liquor Barn locations.

According to the release, the sale of these private barrel selections will benefit some of the richest and highly threatened regions of biodiversity left in Kentucky, ranging from endangered shrimp and mussel-filled watersheds in Central Kentucky, to old-growth forests in the mountains of Eastern Kentucky.

Fireside Chats will return to Bourbon Lodge and offer an intimate living room setting for educational panels, speakers and demonstrations with industry experts, retailers, mixologists and master distillers. The full schedule and programming for Fireside Chats is coming soon.

To get tickets to the festival, as well as Bourbon Lodge memberships, visit ForecastleFest.com.