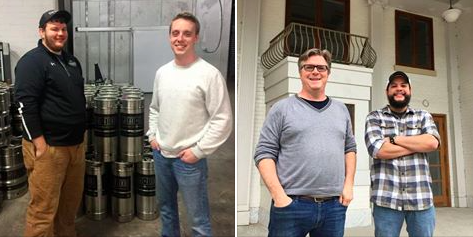 It’s a delicious week for news on the city’s best restaurant and bar podcast, and we get right to it with the surprising story that Z’s Oyster Bar downtown is closing, at least temporarily, according to a sign on the door. Owners blamed the ongoing construction of the Convention Center and the Omni Hotel for a substantial sales slump. Certainly we hope to see Z’s again downtown. We’re looking forward to the late April opening of the Red Herring Cocktail Lounge & Kitchen, a new operation located next to the Silver Dollar on Frankfort. It’s backed by Doc Crow’s co-owner Brett Davis (more on him later) and a pair of managers who just left 8UP downtown.

The word on the first-ever local bourbon-themed festival here is something to get excited about. Bourbon and Beyond will take place at Champions Park on River Road in September, and we’re hearing there will be a stellar lineup of celebrities, chefs, distillers and musicians on hand—if the promoter is able to pull it off. Steve checked in on the Jim Beam Urban Stillhouse Cocktail Program, sure to be a great tourist attraction on Fourth Street Live.

In our Copper & Kings Favorites segment, Rick picked a chocolate pecan doughnut from Hi-Five on East Main, where the two women proprietors are making a name for themselves. Steve visited Pat’s Place in Bardstown for some good ‘ole comfort food. Steve picked the winner in a cocktail contest called the Petal Pusher, while Rick enjoyed the Brooklyn from the cocktail menu at LouVino in Middletown.

Rick talked to our first guests, Zach Barnes and Matt Fuller, at the new brewery complex they’re operating in Shelby Park, while Steve got the scoop on the Red Herring from the man who is making it happen, Brett Davis. All that and more on the city’s finest dining and drinking podcast, sponsored by Harvest Restaurant and the Eye Care Institute.