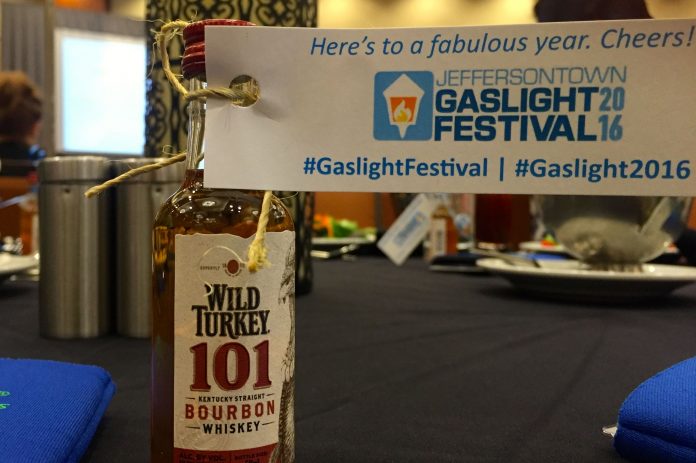 I’m not going to say that Jimmy Russell wouldn’t have gotten a standing ovation from the crowd of 500 at the Gaslight Festival Kickoff Luncheon if he hadn’t opened his talk with the Matthew McConaughey video below, but let’s agree that it helped.

Russell, the legendary master distiller at Wild Turkey, charmed the Jtown faithful with folksy stories and humor, mixed with some hard facts about bourbon in Kentucky.

As for McConaughey, the new “creative director” for the brand, Russell responded to a question from a female fan by saying the actor is “just plain simple down to earth as he can be.” And as if he were anticipating the question “When can I meet him at the Distillery?” deadpanned that even Joretta Russell, his wife of 63 years, had yet to meet him.

To reinforce the idea that McConaughey is far from pretentious, he said that on one of his rare visits to the distillery in Lawrenceburg that the actor came alone, flying into Lexington and renting a car to get there. Russell said that McConaughey’s affection for Kentucky is genuine, that his father played football at UK.

Far from a political rant, Russell lamented the fact that most counties in Kentucky remain dry, while their local governments are more than happy to accept the taxes paid by bourbon producers. He said that 60 percent of the consumer cost of bourbon is tax, and that Wild Turkey pays $1.5 million in taxes every 15 days.

Jeffersontown Chamber president John Cosby toasted Russell, proclaiming he was the Michael Jordan, or the Babe Ruth, of bourbon.

The Gaslight Festival lasts from Sept. 11-17, and includes a number of unique events, including a pipe-smoking contest, a parade and a car show. The big event is a street festival the weekend of Sept. 15-17.