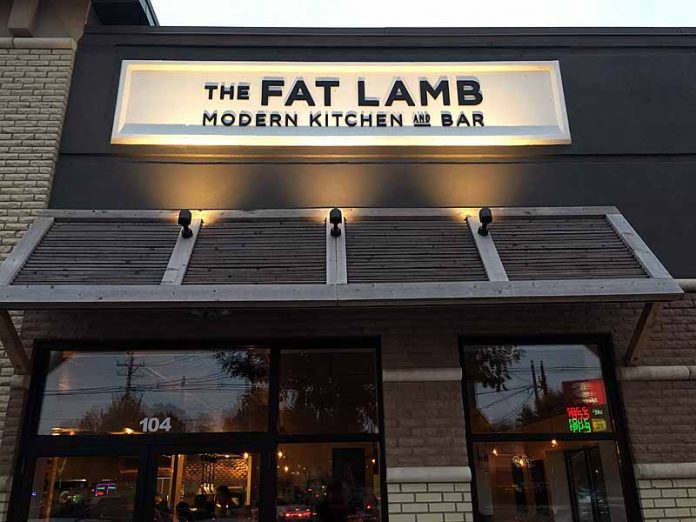 Editor’s note: Soft openings are trial runs for new restaurants, wherein a limited number of guests are invited to sample its food and drink while their staffs get real-world training. Food and non-alcoholic beverages are either served without cost or at a discount. By law, alcoholic beverages must be sold at full price. The food at this soft opening was served without charge.

It took just one month for Dallas McGarity to take over the space that last was Fontleroy’s (2011 Grinstead Drive at the corner of Bardstown Rd.) and turn it into his first solo restaurant, The Fat Lamb.

I don’t recall going to a soft opening like this one, where the kitchen churned out miniature portions of apps and entrees and had servers drop them off at tables. To me, this is a brilliant idea if your goal is to let people get a broad sample of the menu rather than just a few things.

McGarity’s food (prepared by him and chefs Brad Menear and Tim Piper) was exceptionally flavorful and flawless (as far as I could tell) in execution. In a day when fewer and fewer restaurants put salt and pepper shakers on tables, this was one occasion when I didn’t wish for such flavor boosts.

The photos below and their captions show what we had. Just. Freaking. Dandy. All of it. If you love bold flavors, you’ll like what’s coming out of this kitchen. (To see the menu, click here. For now, the cocktail menu isn’t online.)

Favorites, you ask? All of them that we had. I’d eat any of them again. The Mediterranean thread is clearly woven into the menu, but the Southern American influences are strong as well. It’s a terrific mashup of both.

Two cocktails had by my wife and me were the Candelabra (Copper & Kings Floodwall apple brandy, Redemption rye, Nonino, Carpano Antica vermouth, bitters) and the Fade Into You (prosecco, Crème Yvette, Aperol, lemon, sangria ice) were first rate, but portions were a bit small. Yet so was the $10 price, which is on the low end for well-made cocktails in this town.

The Fat Lamb officially opens today, serving dinner only, Tuesday through Saturday “5 p.m. until late.” Sunday brunch will begin Nov. 6, and run from 10 a.m. to 3 p.m.

So what if parking is limited? That hasn’t hurt Jack Fry’s, The Holy Grale, HopCat, Buffalo Wild Wings or Mellow Mushroom, all of which operate successfully in that stretch. If the restaurant is good, people will go back again and again. They know they may have to park on the street and walk a bit (like my wife and I did), but don’t care.

End note 2.: Operators have asked me to share this info: If you’re invited to a soft opening, understand you’re supposed to tip your server on what the check would have totaled if the food wasn’t free, not the discounted total.