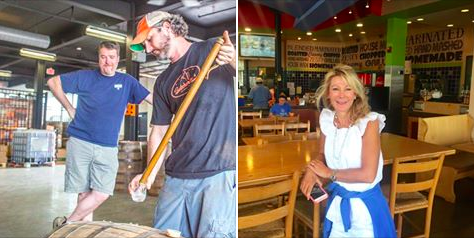 The city’s best restaurant and bar podcast welcomes spring with some exciting news at several local hotspots. Let’s start with Steve’s visit to Fork & Barrel in the former Basa spot on Frankfort Ave. Steve says regular visitors to the former establishment won’t recognize the new one, and the elevated Southern cuisine is fantastic. We learned that the former Tom + Chee spot on Bardstown Road will become the home of Pho Café in June and we’re also reporting positive vibes at Chik’ N Me on Frankfort, where the bonito fries are a visual stunner.

Finally, we react to the initial lineup for September’s Bourbon & Beyond Festival, a music, bourbon and food festival featuring numerous big name bands, local chefs Edward Lee and Dean Corbett among others, as well as Tom Colicchio and other celeb chefs. We discuss concerns over the fact that distilleries have yet to sign on to the new show.

In our Favorites segment, Rick’s Quesorito at Salsarita’s Fresh Cantina drew praise for the volume of queso, while Steve selected the charred octopus at Fork & Barrel. Not only love the Depretador cocktail at Copper & Kings’s Mala Idea event, he indulged in a gin-based Emily’s Garden at Fork & Barrel as well.

Brandon O’Daniel, head distiller at Copper & Kings, discusses two new gins coming from the distillery. Pam Stallings, a franchisee of two local Salsarita’s, talks about the time and food she provides to local charities, including a very special event in late April.

Thanks to our sponsors — the Eye Care Institute, Harvest Restaurant and Copper & Kings for helping us make it to this, our 50th show.