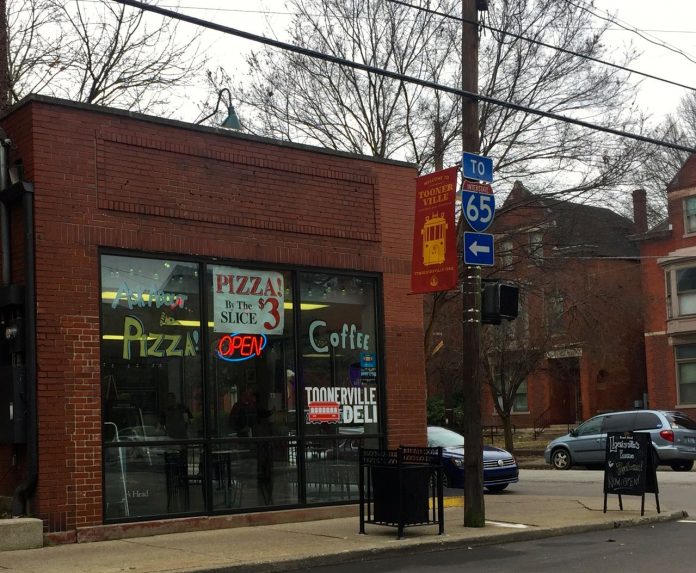 When Dan Borsch decided to focus his career on operating restaurants in Old Louisville, he may have thought he’d no longer need the skills he had learned in politics, assisting with campaigns and even running himself for Metro Council.

But then he ended up as co-owner of a deli-by-day, pizza-joint-by-night operation that faced one giant problem. The Toonerville Deli and Old Louisville Pizza were in a dry precinct, surrounded by businesses that were selling alcohol. And he couldn’t see long-term success selling pizza without being able to offer a beer to go with it.

“Pizza was a product we had for a few months in the summer,” he said in an interview for the Rusty Satellite Show podcast. “We realized that without alcohol sales that it wasn’t going to be a successful concept. We put it on hold, brought it back a month ago in anticipation of being able to have alcohol sales following the wet-dry vote. So we officially won the vote and are looking froward to getting our license.”

Last year, Borsch researched the requirements to turn the dry precinct wet. Namely, he petitioned for a wet-dry vote, knowing that he would have to use good old-fashioned political skills to win a majority vote.

What resulted was a micro-campaign, covering about 14 blocks, and a plan to reach the 1,500 voters who live in the Old Louisville precinct.

The Jan. 10 vote was a landslide for the wet side, winning 90 of 133 votes cast. Borsch said he campaigned door-to-door, sent out flyers and talked up the election, a smaller-scale operation compared with political campaigns he’d been involved in during his earlier career.

“We had a plan, worked it, targeted voters, reached out to them, went door to door, everything you would think of in a typical campaign, just on a smaller scale,” he said. “We were thrilled with the outcome.”

Borsch said it will take 90 days to get all the necessary approvals to start serving beer at Old Louisville Pizza, which operates as the Toonerville Deli during the day. He said he expects to serve his first beer there “one minute after 90 days.” That puts it in early April.

“Every day, you looked across the street and there were operators who had licenses for a liquor store and another operation that could sell,” he said. “We were on the corner of a dry precinct. 15 years ago it was voted dry because of a bad operator. That person is no longer involved in the neighborhood.

“Times have changed, the neighborhood is improved. It’s been changed dramatically over the last few years. I’d like to think they gave us a shot to be a great neighborhood restaurant.”

Borsch and partner Scott Lukemire have been leaders in that change.

Borsch bought the Burger Boy at 1450 S. Brook St. in 2008, where college kids, 2nd and 3rd shift workers, and people partying keep the place busy around the clock.

“The great thing is it’s truly a mix of types of people, demographics, walks of life, it’s a little bit of everybody. That’s what makes it interesting and unique to the city. When I bought it, I thought it was a real energetic area on the cusp of becoming a great neighborhood,” Borsch said.

In addition to the Toonerville Deli, he and Lukemire are partners in the Old Louisville Tavern at 4th and Gaulbert, which suffered a devastating fire in 2014, just a year after they took over. It reopened last spring after extensive renovations, and Borsch said it’s been worth it.

“We had been open a year and felt really good about what we were doing,” he said of the space, which has been operating as a bar for 70 years. “We got a lot of support from the neighborhood and felt comfortable investing money back into the building. We felt if we did a first-class job the neighborhood would support us.

“We made the investment and are really happy about the way it turned out.”

For Borsch, there was no master plan to transition from a career in politics to operating restaurants in the historic neighborhood.

“I got into real estate and bought the Burger Boy,” he said. “The intent was to turn it around and move on. Then I fell in love with the neighborhood, and kept finding other opportunities in Old Louisville. I began to understand the market and see the changes with the growth of U of L. One project led to another.”

And he may not be finished, saying he’s got a dozen different ideas on the horizon.

“Old Louisville has gone though hard times,” he said. “People have sacrificed a lot to make it a great neighborhood. The joke is always that it’s five years away. Maybe now it’s only four and a half.”