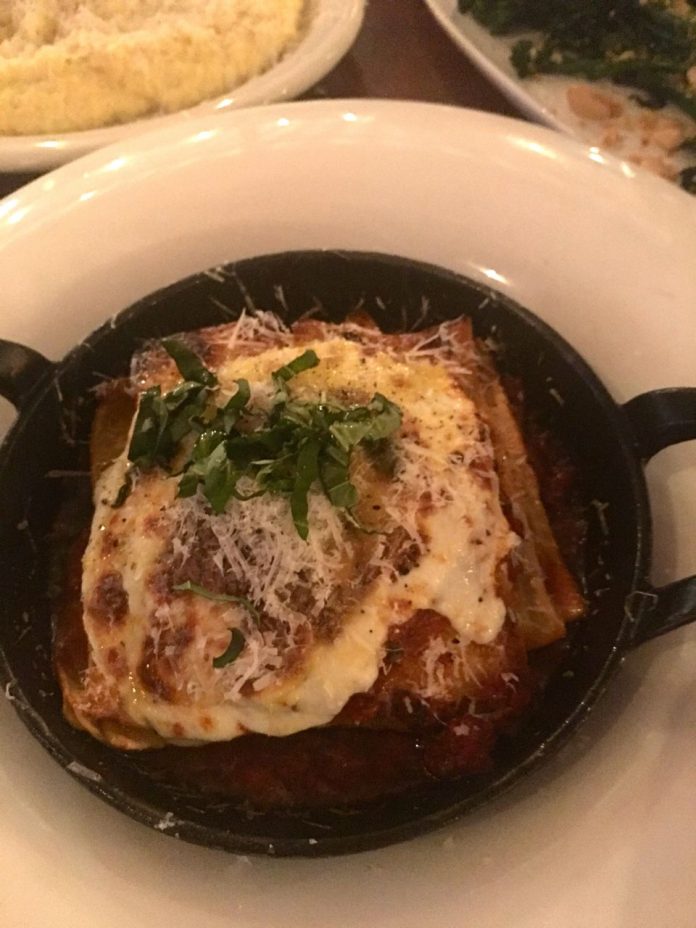 Last spring, when the OLE’ Restaurant Group stopped serving lunch at its Mercato Italiano location in Norton Commons, it wasn’t necessarily that lunch business was non-existent, according to director of operations Rick Moir.

Instead, Moir said that owner Fernando Martinez wanted to make better use of the time available to train his young and talented new chef, Zack Wolf, in doing things the OLE’ way. In the meantime, businesses have continued to sprout in the East End development, creating what Moir believes will be a strong demand for quick and tasty lunch options.

On March 6, Mercato reopens for lunch with a new spring menu featuring items developed by Martinez and Wolf, including two lasagna dishes, a 10-ounce steak, panini, pizzettas and even a burger.

I was invited to a menu unveiling Tuesday, and sampled the lasagna alla Bolognese and lasagna alla Giardiniera, both served in a small skillet. My date and I also tasted other new additions including the asparago crostini, plus broccolini and polenta. Each was perfect and adequately described by Dustin, our attentive waiter.

Another highlight was a stracciatella insalata, a salad featuring seasonal tomatoes and fruit.

“Now that there’s more foot traffic in Norton Commons, we see a lot of people looking for a quick, in-and-out lunch,” Moir said.

The OLE’ group has been tinkering with some of its other concepts as well. Artesano Tapas, in Westport Village, unveils menu changes next week to showcase its new lunch menu, featuring dishes that Moir said are quicker and lighter, with more of a Latin touch.

Down the road at the Red Barn Kitchen, a Saturday and Sunday brunch is launching this weekend, featuring $1 Mimosas and $4 bloody Marys.

Moir added that work on the new St. Matthews location of El Taco Luchador is proceeding toward an April opening.

The company’s other local concepts are the two Mussel & Burger Bars and Guaca Mole.

“Now that all the chefs are where Fernando wanted them to be, in terms of training, we’re firing on all cylinders,” Moir said.