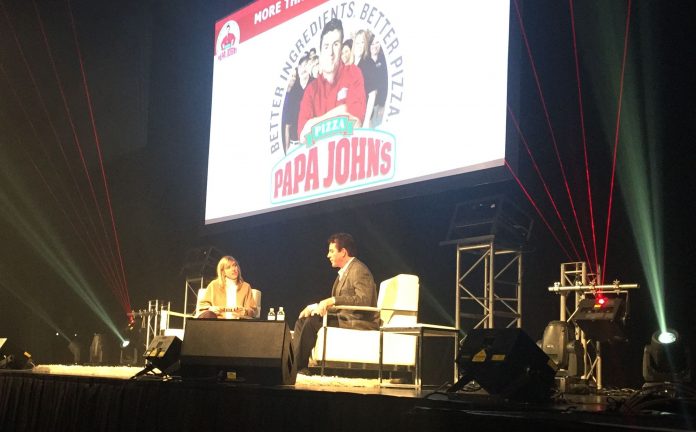 A lot of Louisvillians will be anxious to read John Schnatter’s autobiography, which will likely include 30 years worth of stories about building the Papa John’s brand. He’s made millionaires of many, and enemies of some. Given his insistence on telling it his way, I suspect the book will skip much of the conflict Schnatter has experienced with employees, competitors and investors. 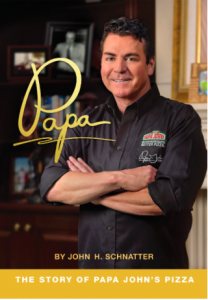 But it’s a fascinating business story, telling the now-legendary tale of starting a pizza business in a broom closet at a bar, selling pizza for $5. That business became a multinational chain with 5,000 stores and nearly $4 billion in annual sales. And it took Schnatter from a guy with a college degree who couldn’t get a job to an international celebrity and billionaire, someone who business people and politicians call for advice.

The book will detail Schnatter’s philosophy for success, which he might sum up with this quote.

“If you’re not making mistakes, you’re not innovating,” Schnatter said. “I have 120,000 employees, I want them all to think like entrepreneurs, to think and innovate. We have a culture where it is okay to make a mistake, learn from it, and go on.”

Schnatter keeps a relatively low local profile for a billionaire living in Louisville, granting few interviews. He keynoted Greater Louisville Inc.’s annual meeting Wednesday, but instead of standing at a podium and making a speech, he opted to have a talk-show format presentation in which Wicked Sheets entrepreneur Alli Truttman joined him to ask questions, accompanied by video clips.

Schnatter covered a wide range of issues and ideas, and gave the audience of about 1,000 a sneak peak of his upcoming Super Bowl commercial (not available for media perusal), in which he unveils a logo that includes more Papa John’s employees and stresses the idea of “pizza family.”

What was fun, though, was seeing a handful of early Papa John’s commercials, including one I didn’t remember that recalled the company’s early battles to establish itself in a pizza delivery world dominated by Domino’s. It showed streets crammed with Domino’s delivery cars slowly being overtaken by those from Papa John’s. And there one about the effort to tie in movies (the kind you used to get from video stores) with your pizza.

Schnatter explained that he had to take his book to a second publisher. He said the first refused to publish his words without extensive editing, wanting to take out his “voice.” I don’t like editors either, but if I’m betting, I’ll predict that some will react to Schnatter’s version of his success story by saying that he should have gotten an editor.

If you’ve lived here, like me, throughout those 30 years of growth, you’ve heard all sorts of stories about Schnatter. And while not all of them are positive, at age 55 he seems to have come to a happy place. His company will likely hit $4 billion in annual sales this year, and the idea to star in his own commercials has proven to be effective.

Schnatter spoke Wednesday at length about the importance of giving back, stressing his involvement in area universities and the Louisville Zoo. He also talks the talk that generates employee loyalty — telling the audience that he gives all his employees bonuses based on the company’s performance.

While he didn’t mention it in his speech, he’s a new member of the University of Louisville Board of Trustees, and made news in his first meeting by questioning real estate purchases by the university.

In 1998, I wrote a lengthy piece for Business First focused on a lawsuit brought against Papa John’s from a franchisee group. The lawsuit’s depositions revealed information that was unflattering to Schnatter, but Schnatter wouldn’t talk to me prior to publication on the advice of his attorneys.

Once the story was published, Schnatter requested an off-the-record meeting with me. As I recall the lunch, he was focused primarily on convincing me that the story shouldn’t have been published. Yes, he was intense, but when it was over he eventually invited me to a golf outing (the paper wouldn’t allow that).

I’d like to think that Schnatter’s approach is a bit softer now. I’d love to get him to do a podcast interview and see if he agrees. What’s not changed, from my view, is his focus on business, his energy, and knowing what it takes to stay competitive. His decision to change his company when it seems all is going so well is indicative of that.