Despite the bourbon superstar role Brent Elliott has as Four Roses’ master distiller, he’s just a regular guy. He’s happiest, in fact, when immersed in finding the next perfect barrel or creating a new blend than standing in front of a crowd and talking about his first solo effort, Elliott’s Select, a bottle that, a bit to his chagrin, bears his image.

“Marketing gets a big say in these things … and they wanted to come out strong,” meaning reinforce the message that he’s the master distiller, and that his predecessor, the legendary and beloved Jim Rutledge, has been retired since September 2015. Friendly and affable, Elliott’s plenty comfortable in front of the press or the public. And that makes his self-effacing sense of humor an appropriate part of his repertoire. “I doubt my face will add much value to the bottle.”

His talent for choosing good whiskey will, however. The 2016 Elliott’s select is a 10,000-bottle project born of 95 barrels and scheduled for release in late June. When you look at FR’s six-figure inventory of resting barrels, that’s rifle shooting for the right flavor.

The barrels chosen were 14 years old and made with Four Roses’s OESK recipe, the lower-rye mashbill of its two yet with a pair of its spicier yeasts. As single barrel bourbons, their finished proofs ranged from 105 to 115. Getting that sort of variety to taste as uniformly as possible took months of work for the distillery’s tasting panel.

I received a press sample of the bourbon two weeks ago, but I admit I wasn’t thrilled. I’m a Four Roses fan, so to write “hot and lean” in my notes about its mouthfeel was unusual. It seemed no amount of breathing in the glass would back the heat off either. Though the nose was redolent of caramel, wood and stone fruit (peaches and dried cherries), the flavors didn’t balance out for me, and the finish was quick. 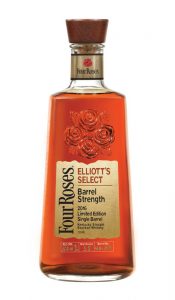 Yet when I and a group of spirits writers sampled the whiskey at Four Roses’ Cox’s Creek facility Monday in Clermont, Ky., the difference was remarkable.

The nose this time around was floral, full of ripe fruit and some marzipan back notes. Mouthfeel was rich and just shy of coating, a texture Elliott described as honey, but one I likened more to its sucrose cousin, agave syrup. Roasted pineapple and marshmallow followed on subsequent sips.

When I asked a reporter friend what her initial press sample was like, she confessed, “Like yours,” so I asked Elliott about it. His answer was simple.

“With single barrels you’ll get some variances, but I’m surprised it’s that much for you,” he said. Then his director of quality side kicked in. “I’m going to go find out what barrel your samples came from. I’m curious now.”

(For what it’s worth, the company’s tasting notes are these: “Subtle aromas of peach jam, magnolia blossoms and light oak preview the elegantly-balanced flavors of spiced vanilla, fresh nutmeg and delicate, ripe fruits. Sweet flavors of honey and light apricot linger in the finish.”)

Of course, our group of six asked for seconds while studying the bourbon further. It was delicious, silken and complex, and I began wondering if I’d given my own sample a full chance. Press samples run between 50 and 100 ml, so you ration them carefully in order take multiple tastes and collect notes over a short period of time. About half my 100ml sample remains, and this weekend, I believe I’ll commit to some further research.

If you want to get your own bottle, ask your favorite retailer now to hold you one. It’s a U.S.-only release, so that increases the odds you’ll get it. Also, it’ll be poured at Four Roses events scheduled for next week’s Bourbon Affair, so if you’re signed up for that action, expect to get some Elliott’s Select. I believe you’ll enjoy it.

* Side note: Elliott was at Thursday night’s Bourbon & Bowties event and pouring the Select. Again, the difference was remarkable compared to my press sample. Two friends who joined me in sips echoed my praise. 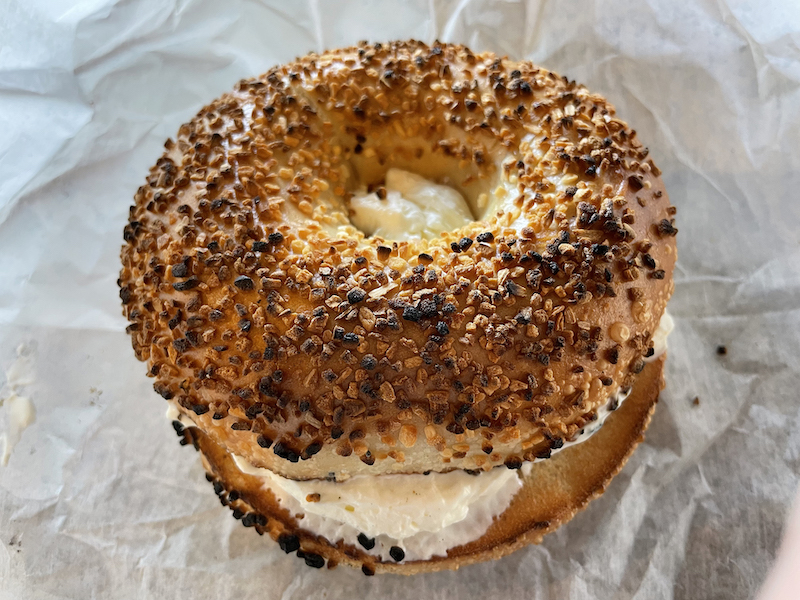 Please, Sir, May I Have Smør? And A Maya Bagel Too?