If you’ve passed the college-age crowd, moved on from the attitude of all-night-drinking and wondering what you did last night, you might not realize that tonight is the biggest party night of the year for many local bars.

For 41-year-old Eric White, who’s owned Gerstle’s in St. Matthews for eight years, it’s a known fact that the kids coming home from college with no reason to get up on Thursday means a packed house. It’s time to book the best bands (This, That and the Other is playing tonight) and make sure there’s plenty of kegs of Bud Light on hand.

“Thanksgiving is probably the busiest week of the year for us and a lot of bars around town,” said White, who has rebuilt the bar, added a patio and upgraded the kitchen. “Thanksgiving Eve is the big night. Everybody comes back home from college or out of town and they all have a good time.”

Of course, you don’t remember a time when Gerstle’s wasn’t anchoring the party scene in St. Matthews, because the bar opened in 1924 with John Gerstle turned his house into a bar. While you might remember Maier’s and Dutch’s, White is proud to say that Gerstle’s has outlasted them all and is the oldest bar in town, and that he’s carrying on a long-held tradition.

“We used to say it’s not your grandpa’s bar, but for a lot of people it was their grandparents and parents who first came in here,” he said.

For a few years in the 1990s, the property was converted into an upscale restaurant called The Avenue, but after a few years new owners returned it to Gerstle’s, including the sign out front with a quirky saying.

“We get a lot of questions about the the ‘no coils’ means on the neon sign out front. I’ve heard it used to be no girls allowed, but they just put no coils. But actually I think it has something to do with the draft beer system,” White said.

And while Gerstle’s, along with Diamonds, Tin Roof, Molly Malone’s, Mello Mushroom, Drake’s, BBC and Saints assure that things are hopping this weekend in St. Matt’s, White acknowledges his bar until recently hadn’t been the go-to spot.

“When I took over, everybody knew about Gerstle’s, but the reputation was not a good one. They thought it was a dark, dirty, hole-in-the-wall bar, didn’t have food and what they had wasn’t good,” he said. “We had to come in and change that whole perception of what people thought Gerstle’s was. We’re still a neighborhood nostalgic bar, with a lot of upgrades, including the kitchen.” 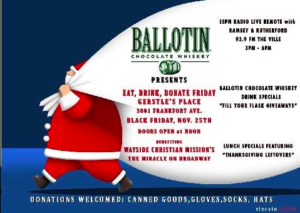 work in the kitchen. Eat. Drink. Donate (catchy name, huh?), is sponsored by Ballotin Chocolate Whiskey, and will include a live radio remote, with benefits going to Wayside Christian Mission. The featured item — leftovers.

“They are going to be true leftovers,” said Dingman, who came on board a few years ago to re-energize the kitchen. “We’re gonna be roasting turkeys early in the week, and we’re going to literally take what’s left over and make some really good sandwiches. We’ll have cranberry aioli, so there’s going to be a real icebox kind of sandwich. You grab some turkey, you grab some bread, you spread it on there.”

If you come, bring some canned goods, gloves, socks, or hats for Wayside Christian Mission’s The Miracle on Broadway.