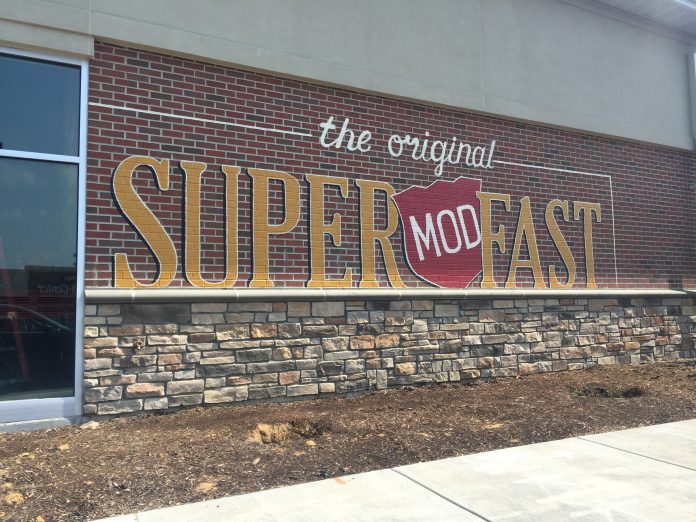 If you like the relatively new concepts at Blaze Pizza and Pieology, you’re going to love the new spot opening soon in the McMahon Plaza on Breckenridge Lane in Hikes Point. Seattle-based MOD Pizza promises “super-fast” pizza at its first Louisville location — and this weekend “Now Hiring” signs went up at its brick building in the newly remodeled Plaza, where a giant Kroger was the focus of a $21 million renovation.

While McMahon’s remodel has attracted new concepts like MOD, Hikes Point’s culinary choices still look like a small-town strip — fast-food, bank, gas station, fitness center. Repeat. But we’ll take MOD, if it lives up to its billing, over the former CiCi’s Pizza that was located nearby a few years ago.

What happens When A Golf Course Doesn’t Make It: The greens rot, but neighbors get bonus greenspace and developers do what they do. At the old Indian Springs on Westport Road, the former clubhouse is being reborn as a barbecue restaurant, there’s a new hotel at the subdivision opening on Westport Road, an Aldi grocery store has been operating for a while, and a handful of restaurant concepts have started popping up, including a Panda Express.

Martin’s Bar-B-Que Joint, which has four locations in Tennessee and one in West Virginia, is taking over the old golf clubhouse, and is now under construction.

That’s App, not Appetizer: Varanese Restaurant has built its own app, for those who want “to make reservations, learn about dinners and special events before anyone else, purchase gift certificates, calculate an appropriate tip, and receive last minute discount offers.” The Frankfort Ave. hotspot has also added Crispy Beef Tenderloin Meatballs to its menu, along with four other items.

Small Plates:  Sunday was the soft opening for the new First Watch restaurant, located in a former bank on Breckenridge Lane. It’s now open for business with a menu slightly different from the one on Hurstbourne. . .It must be true ‘cuz it’s on Facebook — The new Red Barn Kitchen is hiring “highly positive enthusiastic, friendly individuals that don’t mind going home with that distinct BBQ smell.”. . . If you’re considering stopping in Schnitzelburg, consider a meal at Monnik. LEO has a positive review. . . Do you remember the controversy when Metro Government gave the Cordish Cos. a bunch of money to turn a regular bar into a bowling alley, or was it to turn a bowling alley into a bar? Critics at the time said it was a million-dollar giveaway to Cordish for the Sports and Social Club to keep Fourth Street Live going. Well, it appears Cordish has now spent some ($250K) of its own money on “sleek, contemporary finishes, new upgraded furniture and booths and refinished hardwood floors,” according to BizFirst. . . And finally, if you’d walk a mile for a Camel, how far would you go for camel meat? You can find it in Louisville, according to this story in Insider.