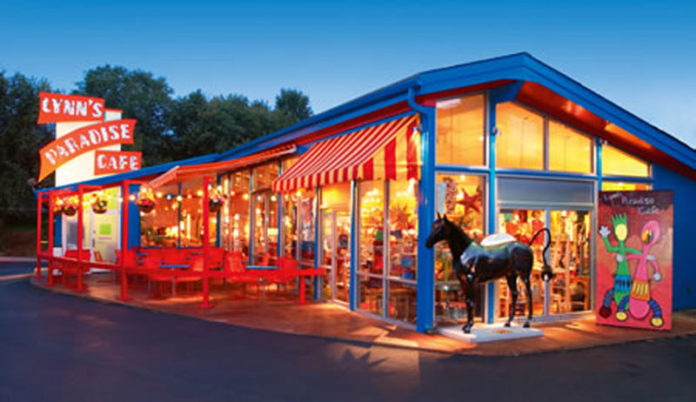 Nearly four years have passed since Lynn Winter shuttered her super-successful Lynn’s Paradise Café, a restaurant that arguably was Louisville’s best-known nationally. The iconic kingdom of kitsch, located at 984 Barret Ave. at the edge of the Original Highlands, drew regular crowds that included tour busloads of people eager to dine among a forest of tacky lamps.

According to Winter, the restaurant hauled in $4 million in annual revenue, a sum many local restaurateurs don’t compile in four years. Yet she shut it down on Jan. 12, 2013, with no explanation why. (At the time, I wrote for Insider Louisville. Read my column for the deeper story behind the controversial closure.)

Fast forward several months to when Winter’s silence thawed (she said health problems led her to close it) and she put the restaurant on the market. Suitors eager to land the property scrambled for a date with Lynn and pitched their woo with what they considered nice offers. One potential buyer spoke of offering nearly $3 million, and would have considered $4 million had Winter negotiated. Another said a group offered $2.6 million, but would have gone to $3.4—had Winter negotiated.

She spurned them both (and others as well) because she wanted $8 million for the restaurant. Plus, any deal had to include her as an in-house consultant on the operation.

If those potential buyers weren’t so stunned by her counter proposal and insistence on involvement, they’d have laughed at her. But they said her stance wasn’t laughable at all, it was crazy.

Today, we all know just how crazy she was to not accept those original offers. Multiple media outlets are reporting that Winter sold her property to the Nashville-based Fresh Capital Group for $1.5 million. Martin’s Bar-B-Que Joint, one of many operations FCG has helped grow, will open there in 2017, marking its second Louisville location. (Martin’s opened in Louisville this week. Click here for our first look.)

As Sen. Bernie Sanders would say, she left a “yuge” chunk of change on the table by sidestepping those original offers.

She was offered $3 million and could have gotten $4 million had she played nice. That’s a real money gap of $2.5 million.

So let’s ‘cipher a little further and add up the lost income. Had she not closed the restaurant 42 months ago and allowed her business to continue its $4 million annual revenue pace, Lynn’s would have drawn nearly $14 million out of diners’ wallets and purses. And if her net profit was, say, 10 percent on all that food, drink and gift shop stuff, she’d have pocketed an additional $1.4 million.

The math assumes a lot here, so in a very general sense, her belief that Lynn’s was worth far more to her than every buyer who approached her, she cost herself almost $4 million by not selling on sensible terms. That these terms were offered by already well-established local operators makes it all the more confounding. I always find it a miss when local business people don’t win the deal.

Despite all the negativity surrounding Winter, I still view see this outcome as sad. Winter caught lightning in a bottle twice: first at 2206 Frankfort Ave., where she opened Lynn’s; then at her Barret Ave. location, a former Key Market that many deemed unsuitable for a restaurant. My goodness, did she ever prove them wrong.

Winter made it all big: the business, its reputation locally and nationally, her personal brand, its unique position in the community—it was flat-out loved for all the right reasons. It became a dining institution on par with any legendary Louisville restaurant, and it was all its own. Winter has been accused of many things, but being a copycat of any one else’s restaurant wasn’t among them. The lady hoed a completely new row.

But she erred in judging the value of that property and her value to buyers whom she was certain would want her in their operation. Perhaps her past success had gone to her head and she believed she could bottle lightning once more. If so, that bottle leaked.